More than one way with cake batter...

Don't you LOVE getting tons of baked goodies out of only ONE batch of cake batter? I do. It allows me to get a bit extravagant in the kitchen- which I love doing. 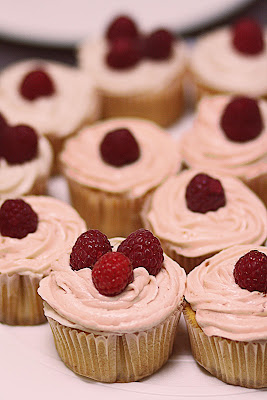 Last week, I made one batch of my favorite vanilla batter- and managed to make 18 cupcakes and 2 cakes. A whole feast! From one batter!

And so I decided to try out different kinds of frosting.

The only frosting (or ICING) I used to make was royal icing... and although those are more for biscuits than they are for cupcakes, I'd still ice my cupcakes with them. I occasionally tried a cream cheese frosting or a dark chocolate one, but never anything more. I was on the hunt for the PERFECT frosting.

Then, last May, I came across Magnolia Bakery's cookbook (which I bought along with a cupcake) and saw a recipe for chocolate buttercream. It seemed fairly simple and so I set out to make it. It was a wonderful frosting.. light, moist, not too sweet, and not too bitter. I was so happy that I had found the "perfect frosting" that I kept on  using it whenever I made cupcakes. And I mean WHENEVER... to the point that I was told outright that maybe I should consider making vanilla frosting...

And so I did.. I made Magnolia Bakery's vanilla buttercream frosting. Which ended up being the antithesis of the chocolate one. It was horrible.. It reminded me of that pink gooey like liquid that the kids are after in that Power Rangers movie I was obsessed with when I was seven...

Needless to say, I was back to my trusty chocolate buttercream frosting. But then, I wanted to experiment with colors, I wanted to try different things with my cupcakes, and so I decided that... yes, I would go on the best search ever. And find the best frosting ever. I watched YouTube videos, looked through cookbooks, and read through various food blogs until I decided to attempt two.. or maybe three.

I chose to make Hummingbird Bakery's vanilla frosting.. and their chocolate frosting... I think they were the easiest frostings I have ever made. And SOOO good. And somewhat magical, if I may say so. You first have to mix the butter and icing sugar together (with cocoa powder if you're making chocolate frosting) and when everything's mixed, you add some milk. I was a bit scared (OK fine, REALLY scared) when I saw that the butter and icing were turning into.. a powdered mess. The butter wasn't creaming and it looked NOTHING like frosting. It didn't even look like cookie batter. It looked like flour and that's it. THEN, I added the milk and within two seconds- EVERYTHING came together and became this wonderful frosting. I also.. for the first time in my life, managed to add JUST the right amount of itsy bitsy red food colouring to get that baby pink haze..

And so this is what I made with Hummingbird Bakery's vanilla frosting. (And yes, this is my attempt at photoshopping a background...) 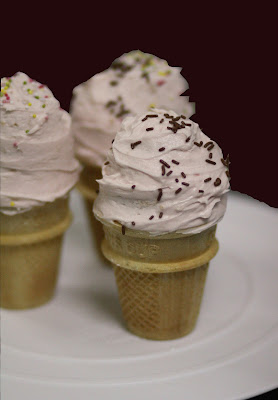 I was inspired after watching this lovely YouTube clip on how to make icecream-like cupcakes. They seemed so easy.. and they were! It was just a bit challenging (for a frosting noob like me) to get the frosting perfect all around. And I didn't stuff the bottom of the cone with candy like the video suggested. The funniest thing about these cupcakes or ICECREAMS, whatever you want to call them, was that they fell over about twice.. and nothing happened.. hardly any icing came off as well.

The second frosting that I made was from this video by Laura Vitale. I think she's absolutely wonderful.. and I discovered her through this video.. her recipes are very simple and straightforward and she sounds extremely relaxed and friendly throughout her clips, unlike many online fooding (yes that's my word for baking and cooking) tutorial presenters.. who seem very robotic.. The frosting for this was divine. Not too sweet and with a wonderful jammy taste. I used strawberry jam.. And she is so right- the jam with the little seeds in them make the frosting look wonderful! 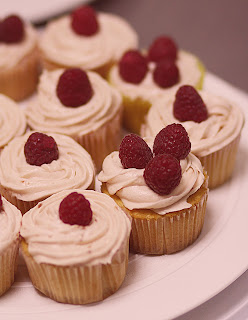 And finally the two cakes! I had initially planned on just layering them with some chocolate frosting in the middle and some frosting covering the entire cake but then I had SO much vanilla frosting left over that I decided to cake each cake in half (and end up with four layers), frost them in between and then frost the whole thing all around with that same vanilla frosting. Bad calculation on my part, since the vanilla frosting wasn't THAT much. It was only enough to crumb-coat the cake. The cake itself was a 5" or 6" cake and was very tiny. And a couple of cake layers were precariously leaning on the edge... 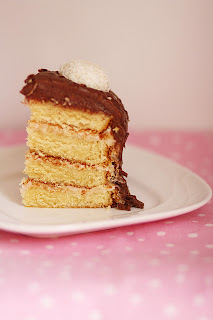 My dad was sitting in the kitchen with me when I was attempting to frost (and salvage!) the cake that he started teasing me by calling it the Leaning Tower of Pisa and telling me that it was RUINED. He even impersonated the cake and went on an impassioned speech from its point of view on how I was placing way too much burden on it .. more than it could handle.  I was determined to prove that it wasn't overburdened and that the cake WOULD be salvaged so I made some chocolate frosting.

And proceeded to ice the cake. Then, I arranged some Raffaelos around it. A cute idea, but not so great with a tiny cake.. it made it look like an alien or some aquatic plankton. But it tasted wonderful- and after all that's what matters. As a good family friend always tells us- the Queen is not coming to tea!
Blogged by spontaneous-euphoria at 02:37