So who here doesn't like crème brûlée? Hardly anyone, as far as I know- maybe even no-one. Alright, well maybe I'm generalizing. But I, for one, love crème brûlée. There's something about biting into crisp, tart topping followed by a wonderful creamy goodness. I love creamy desserts: panna cotta, tiramisu, chocolate mousse, crème brûlée, all of that.. and this is one dessert that I will undoubtedly order if I happen to see it on a menu anywhere.

With a name like crème brûlée you'd think it would be extremely difficult to prepare but it isnt.. it has four ingredients.. it can be part of one those Australian Women's Weekly books called "TAKE FOUR INGREDIENTS" or "QUICK SUPPER TONIGHT".

The two places which I've found have really good crème brûlée in Dubai is La Petite Maison in DIFC and The Market Cafe in Grand Hyatt. La Petite Maison's is quite a large serving and you might need around 3 people to share it but the Market Cafe one is in individual little glasses. Both amazingly good.

And quite surprisingly- although I had this intense love for crème brûlée- I never made it. I kept on thinking I'd need a blowtorch and there was this whole hassle of getting one and setting it up.. and then making sure the water comes halfway up the ramekins etc... anyways I never really had this intense urge to make it until a few weeks back. 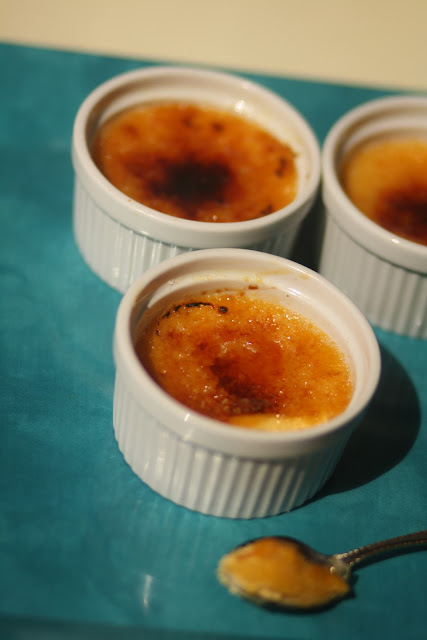 You really don't have to read this italicized bit- it's just a little story of my hunt for the Crème Brûlée Set.


A few weeks back I was in Divertimenti on Marylebone High Street in London. Divertimenti is this absolutely fantabulous kitchen store- until this year I only knew about the Brompton Road one but when I stumbled across the Marylebone one early one Saturday morning I was smitten. Huge, airy, bright, and fully stocked with all sorts of kitchen gadgets, Divertimenti is a shopaholic-cum-chef's (aka my) dream store. I saw a crème brûlée set and was instantly attracted to it. A nice compact little box with four ramekins, a wire rack, and an oven dish... all very nicely and ergonomically structured so when you add the water they're held up halfway around the ramekins. All very nice. I decided I would buy it- but not right then. When I went back a week later (after having thought of it countless times and somehow fallen in love with it), it was gone. I spent ages describing it and asking if the Brompton Road branch had one. Which apparently they did.. except with three ramekins instead of four. NO PROBLEM, I said. I'LL TAKE IT.


And so during my lunch hour, I walked down from work to Brompton Road's Divertimenti and asked about the crème brûlée set. They had kept it aside and brought it out for me. As soon as I clapped eyes on it I was disappointed. It was just a normal oven dish used for crème brûlée- none of that fancy schmancy wire rack holder thing going on. I decided then that I would hunt this crème brûlée set down. And so I was told that Peter Jones might have it. So there I went, somewhat ricocheted back to Sloane Square which was close to the office. Checked with Peter Jones, they had nothing. They didn't even know such a thing existed. I was then told to go to David Mellor across the street (I did even though I highly doubted they would have it)- which they didn't. Then I heard that there was a wholesale catering store on Shaftesbury Avenue which might have it- and so after work I went there. They had no idea what it was.


Anyways by now my rational little self kept telling my other more idealistic more dominant self that maybe I should give up. I mean how important is a little crème brûlée set? I admit, it isn't- but I'm the kind of person that if I decide I want to do something, I will do it. Even if it has to take me halfway across the world, or in this case all over central London. I kept admonishing myself, telling myself that I had become a slave of capitalism and materialism. That what kind of a person was I that I had to have this crème brûlée set or else I'd be eternally restless. There were more important things in life, Sid. But right now, this was an interesting adventure that would have been entertaining regardless of whether or not I found that blessed set (although if I didn't find it that would sort of have been a buzzkill).


Anyways, I gave up actively searching for it- but I kept an eye out wherever I went. Harrods, no. John Lewis, didn't even try. But one day, several days later, I was in Selfridge's- just walking around- when I remembered that Crème Brûlée Set. I had forgotten about it, to be honest. And so I tried my luck. And there it was. In Selfridge's.. five minutes away from my apartment.

Anyways so back here in Dubai I decided to make Crème Brûlée. The recipe at the back of the box was extremely simple- I modified some of the measurements and I am sharing it here with you today. And getting a blowtorch is a good idea. The first time I made it, when I wanted to burn the sugar on top I put the ramekins in the top half of the oven for a couple of minutes but then it turned into a pudding/souffle kind of weird mixture. Not good. So get a blowtorch. But be careful how you use it. I also tried using both a cigarette lighter and a candle lighter but neither worked.

Procedure
Preheat the oven to 160C. Fill an ovenproof dish halfway up with water.
Beat the egg yolks and the sugar until pale and thick. Add the cream and vanilla extract and beat until incorporated. Spoon into the ramekins and place the ramekins into the oven dish filled halfway with water.
Place in the oven and cook for around 35-40 minutes until the edges are set but the middle is slightly loose.
Remove from the oven and allow to cool in the oven dish.
Remove the ramekins from the dish and refrigerate for around 6 hours.
Half an hour before serving, sprinkle 2 tsp of granulated sugar on top of each ramekin and with a blowtorch, caramelize/burn/whatever-you-want-to-call-it the sugar.  Make sure you move the blowtorch in circular motions over the ramekin to equally caramelize.
Re-chill in the oven until you're ready to serve.

It was the first time for me to use a blowtorch and somehow most of the golden dark bits ended up in the center of the Crème Brûlée instead of all over. It still tastes really good though!

Tip: if you get little shot glasses, you can even make mini versions of these- which will look wonderful. 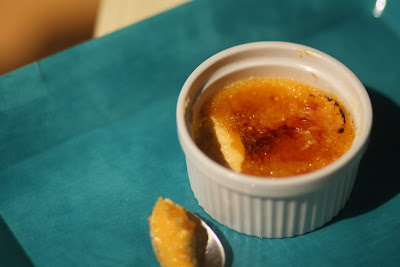