Fresh and Light Side Dishes

(Written on December 18- hence the lag in dates!!) I am finally getting back to normal routine after working for the Dubai International Film Festival for the past two weeks. It was an insanely busy time since I was sort of working full time and studying full time. I'm really glad that I  chose to have all my classes on three days of the week this semester so that left me with Monday and Wednesday mornings to catch up on studying.

This was my sixth year at DIFF and the first time that I worked on the red carpet. My first two years I was a volunteer and did everything from working at the standby queue to ushering and checking tickets. The year after that I became staff and managed the Green Room which was quite interesting. I was basically babysitting any VIP talent  or film talent until the screening began. I got to see quite a few "celebrities".. I've never really been interested in them or their lives and so none of them impressed me so much... apart from Gerard Butler. Who is the most charming and witty person. Who I might have fallen in love with had I managed to spend more time with him. Hahaha.

And last year, I managed the 1400-seater theater. That was a lot of fun, very challenging, dynamic, perfect if you're OCD about organization like me. But this year, I finally got to see all the energy of opening night as it happens. I was on the red carpet with the guests, invitees, security, press, and fans. And opening night was great since Mission Impossible 4 was premiering and the amount of worldwide press and fans we had was insane. Tom Cruise himself spent almost 2.5 hours on the red carpet speaking to every single fan and reporter. He was beyond nice. Except that a couple of times I kept on sarcastically wishing he was a snob like other celebrities so that he would just glide through and ignore most of the fans. I had to wait for him that entire time to do my job and got very impatient. But no, he was really nice and I am very impressed at how down to earth he was.

Now that DIFF is over, I am experiencing withdrawal symptoms as I(and every other staff member) experience ever year. All of us staff are such a close-knit group that we're almost like family- family that gets to reunite once a year. I've made some great friends through DIFF, people who I consider to be closest to me.

But enough about that, and onto the recipes. These are two side dishes I always make because they require very little effort and taste amazing. They're quite filling and make a very adequate meal in themselves.

The first is an arugula and olive salad. 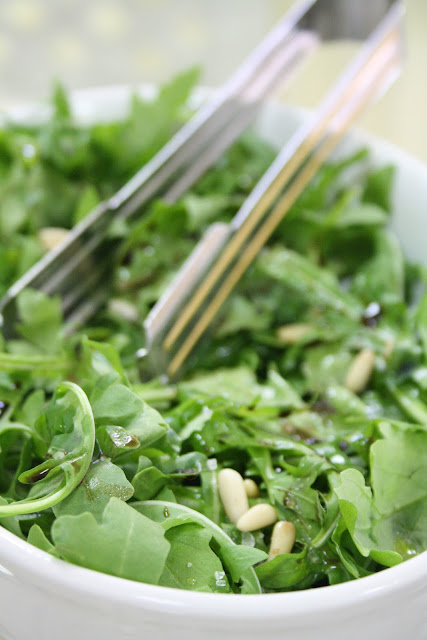 
Procedure
Combine everything together and serve immediately.

The next dish is a wonderful meal in itself: roasted capsicums stuffed with feta cheese, olives, basil, and pine nuts. 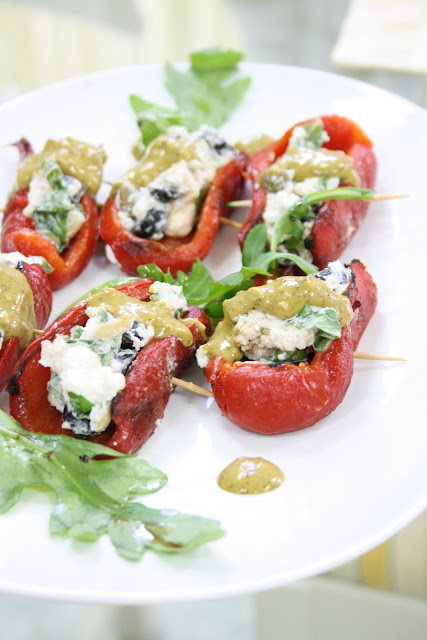 Procedure
Roast the capsicums, skin side up in a 200C oven until the skin is blistered and black- around 30 minutes.
Place the capsicums in a sandwich bag and seal well so that the steam loosens the skin. Allow to cool for around 15 minutes before peeling off the skin.
In a bowl, mix together the rest of the ingredients with a splash of balsamic vinegar, if desired.
Take two to three teaspoons of the feta cheese mixture and place in the middle of each capsicum slice.
Roll up and secure with a toothpick.
Mix together the basil pesto and french dressing and pour over the tops of each capsicum.

Blogged by spontaneous-euphoria at 18:19 3 comments:

Email ThisBlogThis!Share to TwitterShare to FacebookShare to Pinterest
Labels: capsicum, side dishes, vegetarian 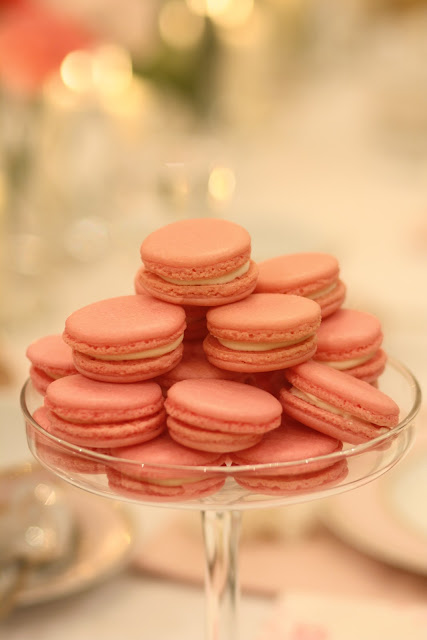 Last week, I had a small tea party- that's why I made those macarons. It was a wonderful gathering where I got to catch up with many friends whom I had not seen in a while.

Sometimes life get so busy that you have no time to do the things you want to do most. I always ponder about how much we're slaves to a capitalist way of life. Work, studying, errands, extracirriculars, projects, businesses, and then- what happens to relaxing? Soaking up the atmosphere? Taking a leisurely stroll? Doing what you really want when you want to do it.

I, for one, love catching up with friends in a relaxed atmosphere, I love cooking and baking, and I love organizing events- it's such a creative process. And so I put all those things together last weekend and threw a party.

So the menu was made up of mini sandwiches in rectangular and triangular shapes, scones with homemade clotted cream, and mini cakes and tarts. The table was set with carnations and roses and pink-lined china.
I also had a "tea bar" with a teapot full of hot water, sugar cubes, and milk next to tiny bowls holding various types of teabags- each bowl labeled with damask paper- all on lacey linen. I wish I remembered to take photos of the tea bar! 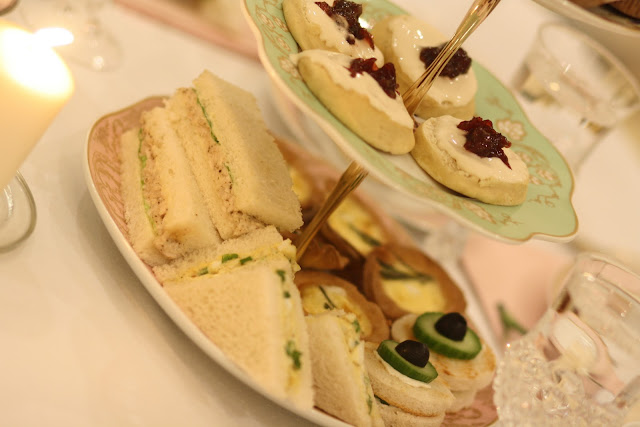 These mini cucumber sandwiches are adorable to look at and VERY easy to make. I usually make them when I want a quick snack or when I feel like something solid with my soup dinners. They work really well with a roasted capsicum soup- the recipe of which I must share with you sometime soon- now that it's "winter". 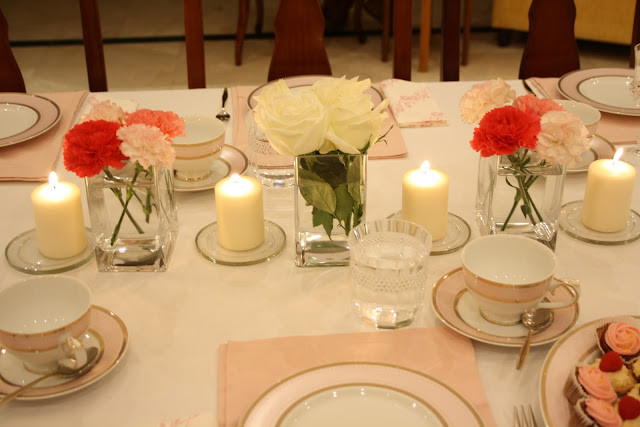 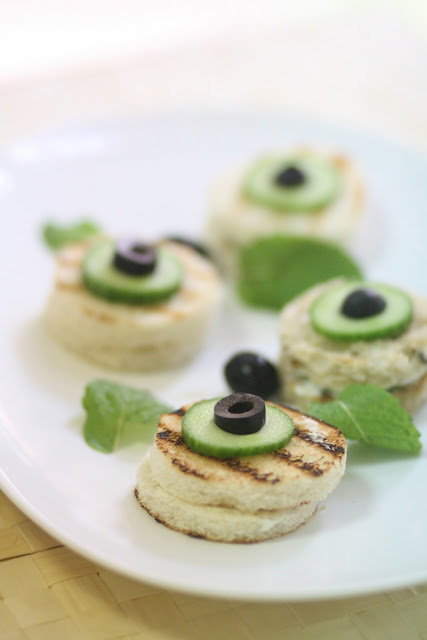 Spread Philadelphia cheese on one side of each round.
On half of the rounds, place a cucumber and a mint leaf.
With the other half of rounds, cover the cucumber-rounds.
Now that the rounds are sandwiched, top each with a cucumber slice and olive oil.
Serve (almost) immediately because the water from the cucumber tends to make the toasted bread soggy after an hour or so.

How can you have a tea party without tiered stands, right? Haha. Here are some of the pastries and mini chocolate and vanilla cupcakes. 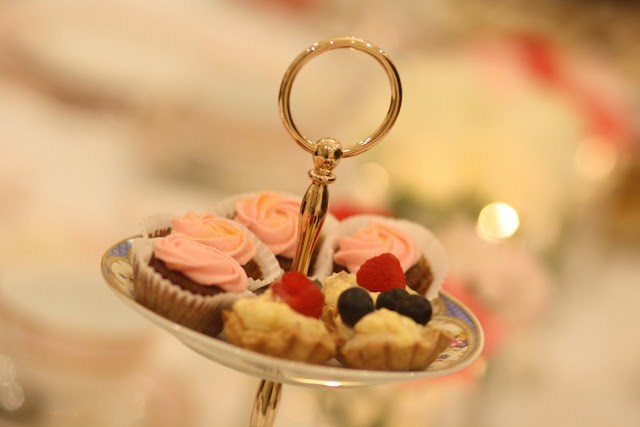 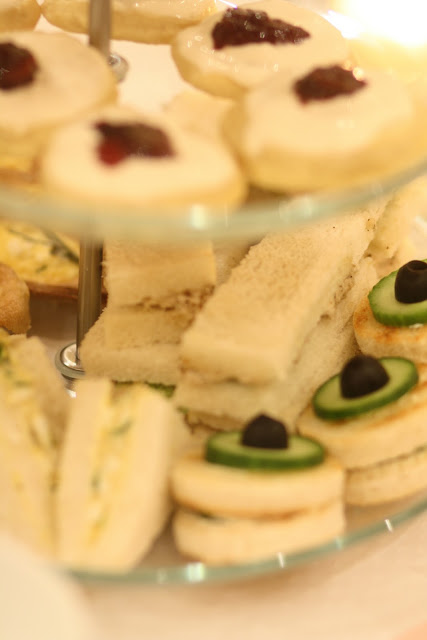 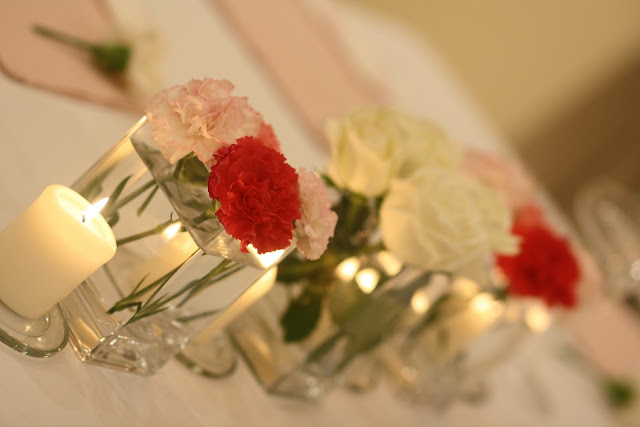 Blogged by spontaneous-euphoria at 10:58 13 comments: