Bruschetta with Pumpkin and Sage

I’ve noticed that in my past few blogposts I’ve been saying the exact same thing: “Oh gosh I’ve broken a new personal record in how long I haven’t blogged!”

Well, I’m going to say the exact same thing now, too. It’s been two months since I posted anything but there is absolutely no excuse this time.

No longer am I a college senior racing against time to finish assignments, struggling on little sleep and even less inclination. I am officially a graduate at that transitory phase in life where I’m no longer an undergrad, yet still not part of the official labor force.

What I’ve been doing for the past month is cooking and baking (so why haven’t I been blogging?!) and meeting friends. Oh, and catching up on sleep and adjusting its ledger after months (years?) of depriving it of what it’s really due.

As to why I haven’t blogged… I really don’t know. I’ve noticed that I am becoming increasingly less frequent when it comes to facing a computer screen. No longer do I have to read hundreds of pages worth of PDFs or write thousands of words worth of papers. What I do online now revolves around facebook, twitter, email, pinterest, StumbleUpon, news’ sites, and instagram. All which can be done with a smartphone. 21st century technology is fascinating. Yet it still baffles me how scientists haven’t yet invented teleportation or the time machine.

I personally think it’s VERY probable. I mean, it sure does sound insane at the moment and possibly even scientifically impossible (I mean compressing all yours cells and zapping it from one place to another? REALLY?) But how crazy did a video call sound even in the early 20th century? I mean... seeing someone as if they were right in front of you although they may be thousands of miles away? How’s that possible? If you place yourself in the shoes of an unassuming person of average intelligence in the 18th century, they would probably think you’re high.

I would love to bring a person from a few centuries ago to today and see their reactions to all our mod-cons and all our awesome technology. Air-conditioning, a television, Skype,  photography,  AIRPLANES??! (ESPECIALLY airplanes!). Is anyone remembering Kate and Leopold here? I just love that movie… and Hugh Jackman’s reactions to things as mundane as television and (was it?) a toaster.

This post is about my developments in the culinary field and what I’ve been up to this past month.
In terms of culinary developments, I’ve been making plenty of finger food. They’re adorable, bite-sized, have the potential to look amazing, and are really flexible so testing creativity is no problem here. I’ve been doing a mix of savory and sweet- making things such as mini halloumi burgers, stuffed tomatoes, burrito wraps, mini pavolovas, and individual mousses. WHAT IS IT about individual dessert servings that make them SO-freakin’-APPEALING?

The reason I’ve been making finger food is because it’s been Ramadan for the past month. Ramadan is the month where Muslims fast (for 30 days, or 29-depending on the moon) from sunrise to sunset. So that’s x hours (insert your city’s solar schedule here- almost 15 hours for us) of no food and no water. Basically.
The exterior of the month is about abstaining from food and water and is meant to teach Muslims patience, self-discipline, and compassion in identifying with those less fortunate. But that is only the beginning of what the month is really about. You fast not just from food and water but from gossip, slander, short tempers, and the superficialities of life (which you’re supposed to refrain from throughout the year, not only during Ramadan, but who really does?)

The month is about coupling this daily abstinence from food with an increased level of spiritual awareness and divine devotion. The month is about reading the Holy Quran, praying as much as possible, remembering your sins of the year and asking for forgiveness, engaging in charity, working towards developing yourself into a better human being, reconnecting with friends and family, and strengthening your faith.

In a way, Ramadan becomes a fast from all the things which distract us from what’s really important: faith, patience, compassion, generosity, self-development, family, and friends. I love this month because I think life becomes about what it truly should be about. I’ve never felt as connected to the divine (and thus, the world) as I do this month. The moments with friends and family this month are special ones that don’t come often.
I can’t emphasize how much so many of my fellow Muslims look forward to this month- it is undoubtedly the most favorite of the entire year for many. On the surface that may seem shocking as even I wouldn’t really feel inclined towards the idea of not eating for 15 hours a day for 30 days straight. But you just have to take part in the month to feel its beauty surround you.

Moving on to the recipe, today I’m sharing with you a recipe for bruschetta with pumpkin and sage. Pumpkin and sage is a wonderful combination as both flavors complement each other wonderfully. It makes a lovely snack, a wonderful appetizer, and a great supper. 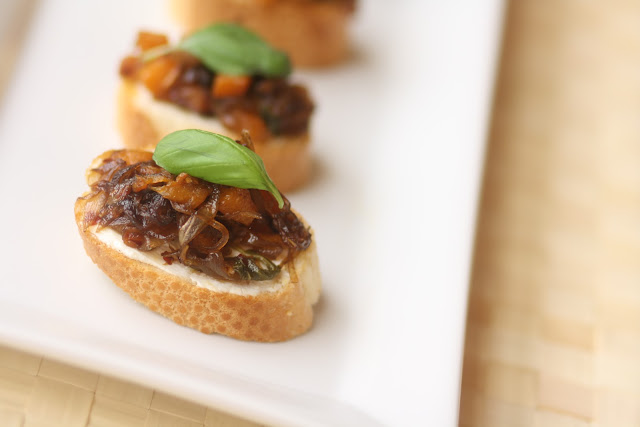 Bruschetta with Pumpkin and Sage
Ingredients
1 French baguette, cut into 15 2cm thick slices
2 tbsp olive oil
1 onion, thinly sliced
1 tsp soft brown sugar
1 tbsp balsamic vinegar
300g butternut pumpkin, cut into 1cm cubes
½ tsp chili flakes
2 tbsp shredded sage leaves
3 tbsp crumbled feta cheese, optional
Basil leaves, to garnish
Procedure
On a heated grill pan, lightly toast the baguette slices for 1-2 minutes on each side or until crisp.
In a large saucepan, heat the olive oil and then add the onion. Stir to coat in the oil and continue stirring on medium heat for 5 minutes or until onions have become translucent.
Reduce the heat and cover the pan with the lid for 10 minutes, checking often and giving the mixture a stir so that it browns evenly. Halfway through, stir in the brown sugar and balsamic vinegar.
Once the onion mixture has caramelized add the butternut pumpkin and the chili flakes and stir to coat it with the onion. Slightly increase the heat and continue stirring for five minutes. Place the lid on the pan and allow to cook for 10 minutes.
Next, remove the lid and add the chopped sage leaves, stirring thoroughly. Continue stirring for about five more minutes or until the pumpkin has cooked through.
Remove from the heat and allow to cool slightly. Add in the feta cheese now if using.
Then, take heaped teaspoons of the onion/pumpkin mixture and spread over each baguette slice. Garnish with a basil leaf.

Blogged by spontaneous-euphoria at 03:27 3 comments: