Tagine @ The One & Only Royal Mirage

So I finally satisfied my craving for a full Moroccan meal... after three years. I hadn't had one ever since I went to Marrakesh in late 2007 and subsequently threw a Moroccan themed party as soon as I was back. But last night, things changed. Last night, I went to the famed Tagine at the Royal Mirage on Al Sufouh Road. After spending fifteen minutes navigating through the bends and curves of the resort (where there is absolutely zero lighting, mind you), I reached "The Palace"- which is the part of the resort that houses Tagine. The stunning decor that awaited me as I opened those huge wooden doors came as a wonderful surprise as the aroma of rosewater and sight of candles and roses petals encapsulated my senses. The restaurant was also quite busy for a weeknight.

I went up to the maitre d' and introduced myself and told her that I had made a reservation about an hour ago. She had written my name down as "Ms. Sad" instead of "Ms. Sid" but never mind that. She asked me to wait while she prepared a table which was kind of odd since we already had a reservation. Seven minutes later, I went up to where she had previously been and she was nowhere to be found. The manager of the restaurant then approached me and I told him that I had a reservation and that I had been waiting for around ten minutes. He called the maitre d' over and started explaining to her that she needed to get a table ready to seat us. She seemed extremely confused for some reason and it was a further five minutes before we got to our table- and we were seated somewhat haphazardly.
The embroidery on the tablecloths and napkins were very ethnic and elegant. They were cross-stitched in various shades of blue and designed in a traditional Islamic pattern. The table also had one candlestick and a rose. The plates were turquoise and wonderfully intricate. We were then handed the menu and began to peruse it.
We decided to settle for two starters and three main courses. We chose the briouat with mince, the Marrakesh salad, the kofta tagine, the lamb tagine, and the vegetarian couscous. The briouats were lovely and warm. You could taste each ingredient in the mince perfectly. The bread that the served was also wonderful, albeit cold. While ordering, I had specifically made sure that it would be served warm but it wasn't. The best thing about the bread though was that it smelled and tasted of cumin- and we all know how aromatic that can be. The Marrakesh salad was served in five little bowls and was made up of carrots, cauliflower, zucchini, lentils, and something else which I can't exactly remember right now. The salad was also flavoured very well and contained many herbs.
Soon after, the main course arrived in three tagine pots (obviously!) which were decorated with engraved silver. The waiters lifted the tops of the tagine pots simultaneously and we were presented with three steaming dishes that just begged to be eaten. The waiters service was impeccable and they were extremely attentive. The only issues with service though was that the maitre d' and restaurant manager seemed a little flustered. When we were first seated by the maitre d', we asked her for a extra chair in which we could keep our bags (a habit of ours...). She seemed to have forgotten, we then asked the restaurant manager when he came to hand us the menu.. he seemed to have forgotten too. We then asked the waiter who brought us our drinks and be conjured up a chair almost immediately.
Anyways, back to the food. It was wonderful but it could have been a lot better. I personally preferred the flavour of the kofta tagine to the lamb tagine as it was spicier and more intense. Although out of the three dishes, it was the smallest in terms of serving size. The lamb tagine was cooked with the traditional vegetables that Moroccan dishes are often cooked with- carrots and zucchini and eggplant and potato and the like. I found it a little less spicy than ideal- which obviously had an impact on the flavor.
The couscous can be divided into two separate parts to review. The vegetables were extremely warm and spicy and were just out of the pan. It seemed to me though, that it didn't really blend well the couscous as the couscous itself was cold and bland. Couscous obviously made with boiling water but salt, pepper, or lemon juice is often added to the mixture. And the vegetables that are usually added are most often mixed well together with the couscous- but it didn't seem to be that case with this.
There were two fez-adorned musicians playing on traditional Moroccan instruments and singing. It was really nice as it was quite low and blended in perfectly with the background. I loved it since they played "Ya Rayeh"- which is one of my favourite North African songs.
Overall, I would give the experience a 7.5/10.. pretty good... although the food wasn't that amazing. I think what salvaged the place was the decor more than anything. I have a weakness for candles and rose petals. 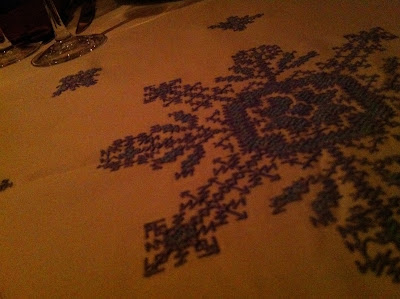 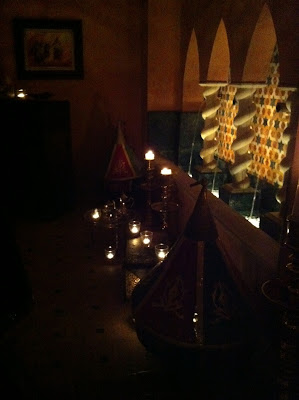 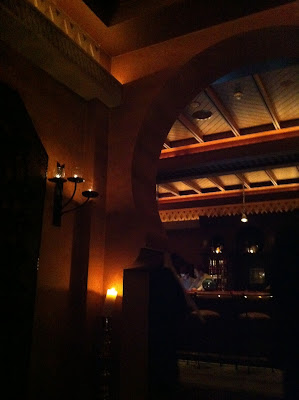 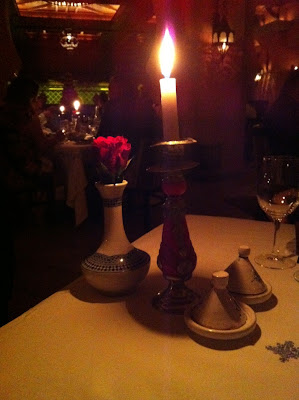 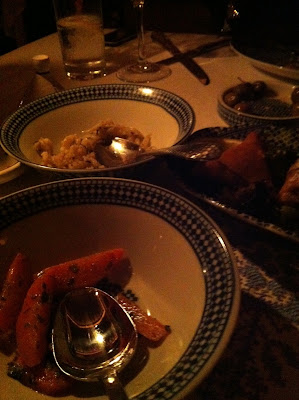 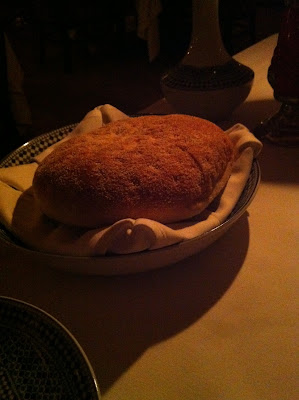 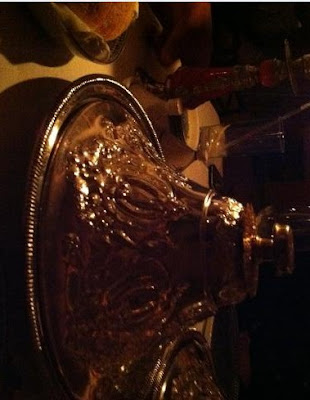 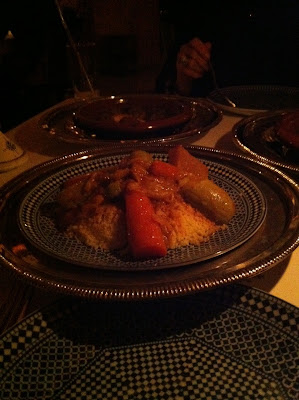 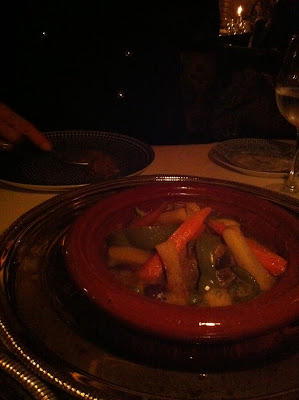 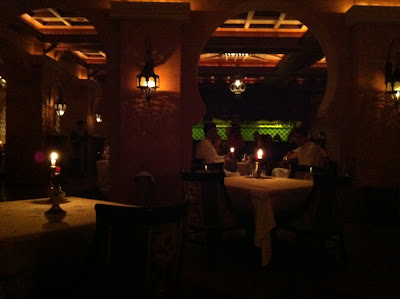 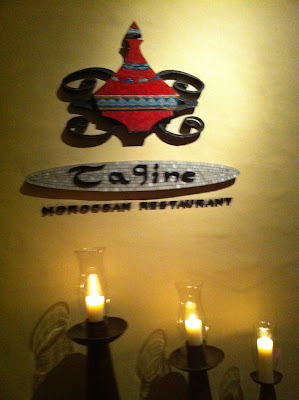