When Things Go Awry in the Kitchen

So this little post is dedicated to all the times when you're completely excited about making something but then..... somehow, it just DOESN'T work out. I've had a few of those experiences myself lately. Three, actually. And this is me chronicling those experiences and how I (in some way) managed to salvage what I was making! 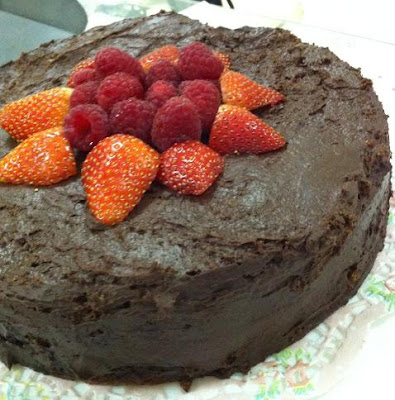 So I decided to make two butter cakes and cut each in half so that I'd end up with four layers. I wanted to pile them up and fill them with chocolate ganache in between each layer. And then I wanted to spread frosting around the outside of the cake and then arrange some pretty fruits on it. The vanilla frosting recipe that I read seemed a little too complicated for the two hours I had devoted to making and completing this cake, so I decided to skip it. Instead, I chose to fill the entire cake with chocolate frosting. Sounds good till now, doesn't it? So the cakes came out of the oven, oddly dark and (if I dare to say so) over-cooked! I decided to wait until they cool down before I sliced each in half. Of course, I got caught up with university work and couldn't do anything more with the cake until the next day. So the next day rolled around. I sliced the cake in half (albeit in a very funny manner). I read somewhere that the best way to slice a cake in half is to measure the diameter and find the midpoint of the length and then to poke toothpicks around the cake in equal intervals. I did just that and it worked perfectly.
Then I made the chocolate.. let's call it TOPPING. The recipe said that if you want a chocolate sauce, use it immediately. If you want a ganache, let it cool down, and if you want a FROSTING, then wait for it to cool down and then REFRIGERATE it for an hour. And so I patiently waited for it to cool down and subsequently refrigerated it. According to the recipe, we needn't worry if the frosting is rock solid. All we need to do is beat it a little. I left it in the fridge for half an hour, it was hard as STONE, and I beat it till it turned to a normal consistency (which I then realized lasted only for about ONE minute!). Anyways, I hurriedly spread the frosting over the cake to layer it. (I decided to demote my dreams of a lovely cake from a four layer one to a two layer one.) Then I spread the frosting all around the outside. Then I placed the fruits over it. The frosting was just horrible. Really cold and hard and I love dark chocolate but this was just too freaking bitter for a frosting.. I think I should use milk chocolate from now on instead of Lindt 70% cocoa. SIGH. Anyways, how did I salvage it? I don't know.. I TRIED to make it look pretty and I took the frosting out after half an hour instead of one. I didn't try the cake but those who did apparently liked it. (And I'm pretty sure they weren't saying it just to please me because until today they have no idea who I am).
Gone Awry #2: Fresh Fruit Cupcakes
Friday afternoon and I was way too lazy to drive two minutes to the supermarket. But I wanted to bake. And so what did I do? I chose a recipe where I was PRETTY SURE I had ALL the ingredients. So I chose fresh fruit cupcakes. All I needed was some cream, plain flour, eggs, and sugar. Literally, that's IT! Oh, and some vanilla essence and berries. But, anyways, point was that was what I knew I had in the fridge. And so I go down to the kitchen only to find that the only flour there (apart from self raising) was something called "plain flour for diabetics". I figured that's would be the same thing.. just low in sugar and carbohydrates like the packaging said. Easier said than made. For some reason the flour didn't have the same consistency as normal plain flour and so the batter only managed to yield about six cupcakes. (All the better actually considering what happens next!). So I opened the oven door, placed a kebab skewer into the cupcakes to see whether they were done and... *dramatic music* when I lifted the skewer out the batter, the cupcake came up with it! It was stuck to the skewer because the flour had made it REALLY dry. Anyways, I let the "cupcakes" cool down and then whipped some of the cream and put it on the cakes with the fruits and dusted some icing sugar on it. It looked AMAZING but the taste was kind of... off. Anyways. That was kitchen disaster number 2.. onto the grand finale.. number 3. 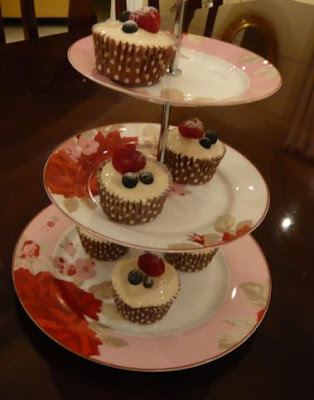 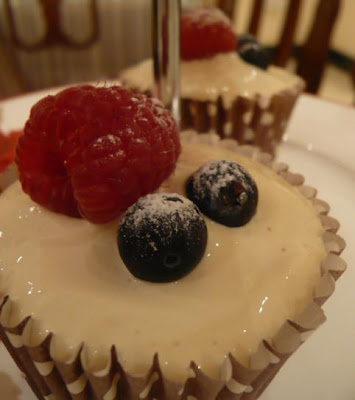 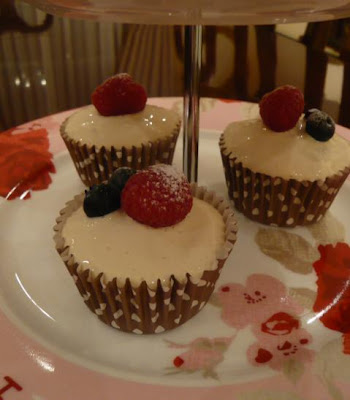 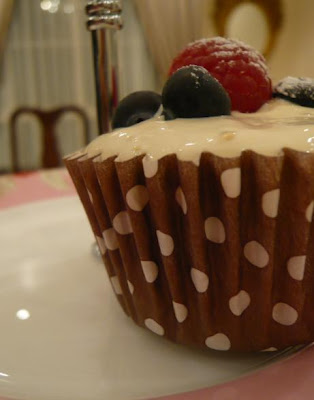 Gone Awry #3: Caramel Sponge Cake
Actually, I think this was the BEST "kitchen-thingy-gone wrong". The cake (made out of rich dark brown sugar)
turned out PERFECT. I think my oven has a problem- it cooks everything super-fast. This cake was supposed to be in
for 40 minutes but was perfectly baked after 15..... Anyways, the frosting on top of the cake was supposed to be a golden
syrup frosting made out of golden syrup, butter, and eggs. This is where things started going wrong.
I was supposed to stir all the ingredients for the frosting in a pan over low heat. I did that. The egg ended up
SCRAMBLING (and so I ended up with scrambled egg as a frosting) and the butter melted but didn't mix properly.
So the frosting effectively ended up as scrambled egg and melted butter. What happened to the 100g
of golden syrup, I DO NOT KNOW. There was not a trace of it in my taste buds. And what I oh-so-smartly
decided to do was place the frosting over the cake. Then I came to my senses and realized that, "ohhh, my lovely
caramel cake has SCRAMBLED egg on it!" I quickly scraped it off and then made the caramel. This was the best part.
I had tried making caramel once before with caster sugar but it didn't work. This time, it was heaven.
Nothing happened for about ten minutes but the minute I swirled a spoon in the sugar everything started melting.
The smell was just... indescribable. And then the caramel was made in two minutes flat. The thing I didn't realize was
that the caramel hardens IMMEDIATELY. And so it hardened and then I cut into pieces and placed it on top of the cake
which I had spread with golden syrup after removing the scrambled egg frosting. 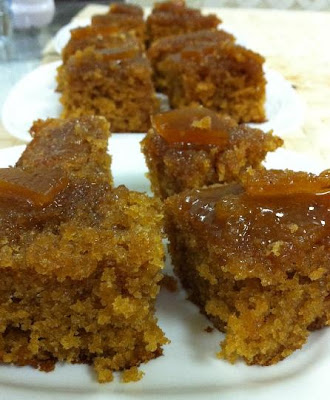 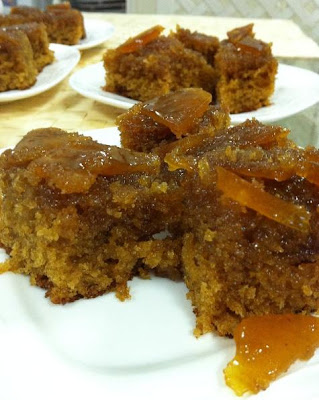 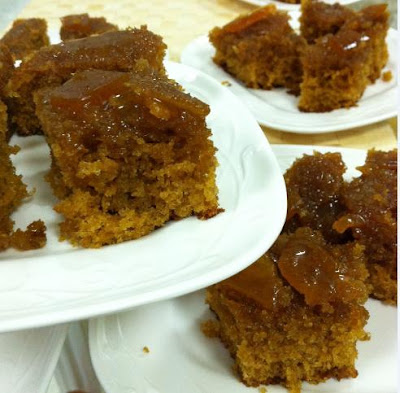 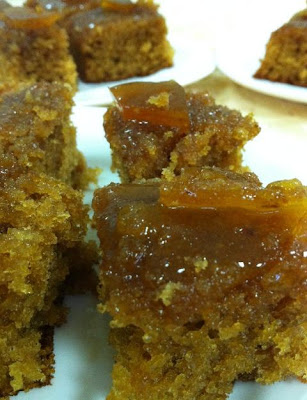 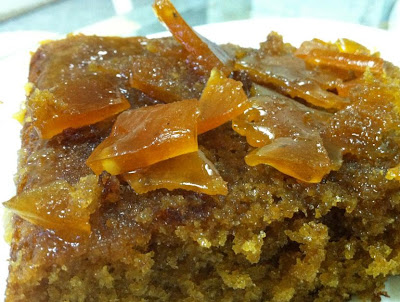 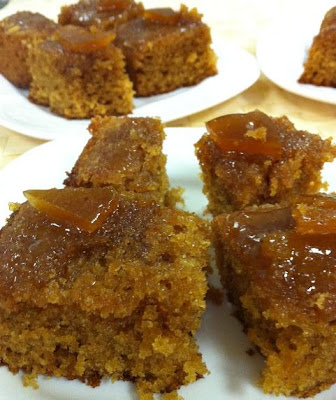 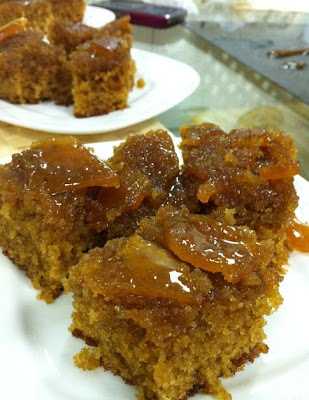