The April 2011 Daring Bakers’ challenge was hosted by Evelyne of the blog Cheap Ethnic Eatz. Evelyne chose to challenge everyone to make a maple mousse in an edible container. Prizes are being awarded to the most creative edible container and filling, so vote on your favorite from April 27th to May 27th at  http://thedaringkitchen.com

So I made these today. On the day we had to post them. The actual recipe called for maple mousse in ham containers... and since I don't eat ham and to be honest found the meat/maple taste mixture a bit odd, I opted to make edible chocolate containers.

I had seen a technique for this in one of my many cookbooks and decided to recreate it with some variations of my own.

For the edible chocolate container:

Turn small glass bowls upside down and place on a tray.
Scrunch up some baking paper and form it over the upside down bowls.
Melt the milk chocolate on a double boiler and leave to cool for five minutes.
Pour the melted chocolate over the bowl covered with baking paper. Use a spatula to evenly coat the bowl with the chocolate. Leave to set for half an hour and then place in a fridge for two-three hours to completely form.

For the maple mousse:

Directions:
1. Bring maple syrup to a boil then remove from heat.
2. In a large bowl, whisk egg yolks and pour a little bit of the maple syrup in while whisking (this is to
temper your egg yolks so they don’t curdle).
3. Add warmed egg yolks to hot maple syrup until well mixed.
4. Measure 1/4 cup of whipping cream in a bowl and sprinkle it with the gelatine. Let it rest for 5
minutes. Place the bowl in a microwave for 45 seconds (microwave for 10 seconds at a time and
check it in between) or place the bowl in a pan of barely simmering water, stir to ensure the
gelatine has completely dissolved.
5. Whisk the gelatine/whipping cream mixture into the maple syrup mixture and set aside.
6. Whisk occasionally for approximately an hour or until the mixture has the consistency of an unbeaten
raw egg white.
7. Whip the remaining cream. Stir 1/4 of the whipped cream into the maple syrup mixture. Fold in the
remaining cream and refrigerate for at least an hour.
8. Remove from the fridge and divide equally among your edible containers.

The maple mousse was heavenly. I don't think I've had anything moussey apart from chocolate or lemon mousse and this just gave me the idea that I can make tons of different types of mousse! And all sorts of flavours! The more cream I added, the lighter the color became, but the taste stayed wonderful.

Here are some pictures, which I'm not too happy with.. they took me a total of 3 minutes to snap. I'm still horribly jet-lagged and just wasn't bothered to spend lots of time taking photos. But enjoy. 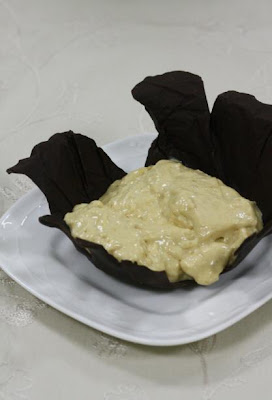 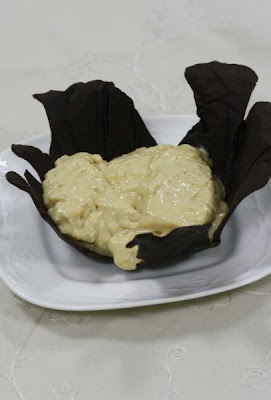