A Treatise on the Macaron 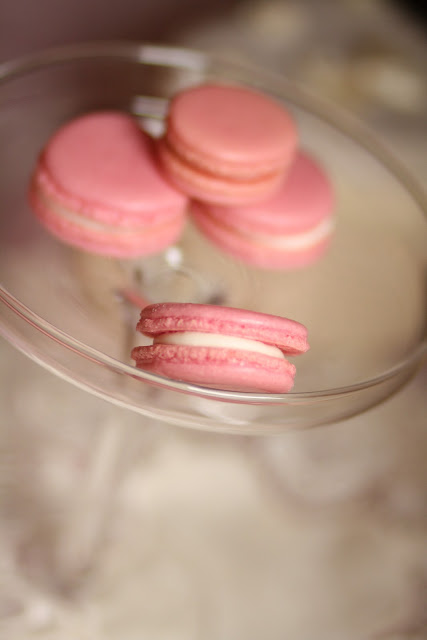 I can say with a lot of confidence that upon reading the word "macaron" you thought of Paris and its wonderful pastries. Maybe you're really imaginative and you pictured a rainy day on the Place de la Concorde, with the Eiffel Tower in distant view and cars driving around the cobbled streets. Maybe (if you're a woman) you were wearing a wonderful trench coat in a sublime shade of raspberry, and maybe you were nibbling on a macaron that you had just picked up from Pierre Herme, Laduree, Gerard Mulot, or some other amazing bakery.
But apart from that, I can also predict fairly certainly that if you're one of those people who have tried making macarons or who have wanted to your heart skipped a beat or you made an inward groan upon reading its name. 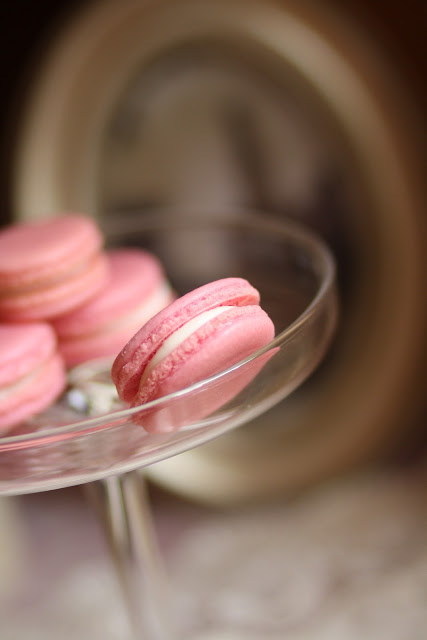 Macarons, wonderfully indulgent as they may be, are also notorious little devils. I've lost count of the numerous blog posts or articles I've read about the art of macaron-making, and how disastrous it can be.

I for one, tried macarons once in late 2009/early 2010. It ended up looking like soup. Admittedly, the recipe was a very basic one which didn't talk about technique or anything at all. Then, I took a macaron making class at Ateliers des Chefs Dubai in May 2010. Then, I tried making them in September of that year and they turned out pretty good! The next two tries were a disaster. And then two months ago, I researched, and researched, and researched.

The nerd in me came up with a sheet full of notes I had gathered from various books, different websites, talking to other people, and pure trial and error. I studied that sheet so religiously and then began making my macarons *drumroll*

The entire process I was extremely nervous- constantly checking to see if my macarons had developed feet or if they were smooth-topped. The entire process took me three hours and drained me. I made raspberry macarons that day and they turned out reaaally good.

Last night, I decided to attempt to try them again- I thought that maybe it would take less time but it took three hours again. I manage to get about 60 shells or 30 macarons from the batch that I make which is pretty good!

I'm posting the version of a macaron recipe I'm most comfortable with below and I'm going to follow that up with a list of explanations.

Procedure:
-With a bottlecap, draw circles on three sheets of baking paper spacing them around 1.5 inches apart. Turn the baking paper over and place each on one baking sheet. Make sure that the side that you drew on is on the underside.
-Process together the ground almonds and the icing sugar until fine and well combined. Then sift the mixture into a large bowl. You will end up with residue of the ground almonds- pieces that are too coarse or too big to be sifted. Weigh them out and then sift the same quantity of new ground almonds. Repeat the process until you have made up for all the ground almond residue.
-In a saucepan over low heat, place the water and sugar and allow for the mixture to boil. Make sure the temperature doesn't go above 115C.
-Meanwhile, whisk 50g of the egg whites till soft peaks form. Then, slowly pour in the hot sugar mixture and beat on high speed for 15 minutes or until the mixture is stiff and forms a beak like shape on the tip of the whisk.
-Take the remaining egg white and with a rubber spatula, mix together the egg white with the almond and icing sugar mixture. At this stage, also add your coloring.
-Take four tablespoons of the egg white mixture and mix into the almond mixture. Then add the rest of the egg whites and start the macaronage process by incorporating them with an alternating cutting and folding motion.
-Once all the egg white has been incorporated, lift your spatula with some of the macaron mixture and analyze how it falls from the spatula. You want the mixture to fall into the bowl in a smooth ribbon-like motion.
-Preheat the oven to 150C and place the macaron mixture into a piping bag fitted with a 2-3cm round tip. Pipe circles onto the already drawn rounds.
-Lightly tap the baking sheet on the surface of a counter and allow to form a crust for around 30 minutes.
-Place in an oven for around 20 minutes.
-Remove and allow to cool before spreading with buttercream.
-For the buttercream, mix everything together and whisk really well until mixture is as white as possible.

Macaron Cheat Sheet:
-age the egg whites by keeping them at room temperature for 6 hours prior to using. 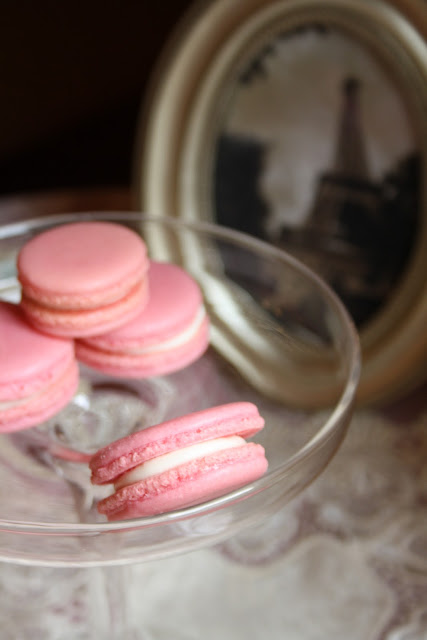 -make sure that your kitchen is well ventilated. If it has a door that leads directly outside, keep that door shut. If your kitchen has air conditioning of any sort then switch that on!
-do NOT underestimate the importance of EXACT measurements. Even one or two grams here or there might alter your final result.
-If you don't have a candy thermometer (like me), then take tiny teaspoons of the water and caster sugar mixture (while it's boiling) and place in a bowl of cold water. Quickly attempt to touch the sugar mixture with your fingers. The mixture is done boiling if the tiny sample you put in the water forms a pliable round structure in your fingers.
-it is crucial that you get the macaronage process correct. Keep checking every few seconds to see whether the mixture is falling in a ribbon like form or not.
-while incorporating the egg whites, and macaronaging, use firm, steady motions with a flexible spatula.
- it is very, very important to allow your macarons to form a crust. They should not be sticky when you touch them before putting them in the oven.
-it's better to bake macarons in a low-heated oven for a longer period of time than in a hot oven for a shorter period of time and risk spoiling it.
-that's why: temperatures above 150C (non fan forced) might be dangerous
- once you've piped the macarons, tap the tray to break up the air- this reduces the risk of air pockets in macarons.
- when baking, make sure that the top of the baking sheet reaches the middle of the oven.
-open the oven door every two minutes to let the humidity of the oven out.
- right before removing the macarons from the oven, spray a countertop with water and as soon as the sheet is out, pull out the baking paper with the macarons on it and immediately place over the damp countertop. This makes it easier to remove the macarons.
-do not eat the macarons on the same day that they're made. store in the fridge for 24 hours in order for the flavors to develop.
Blogged by spontaneous-euphoria at 13:05