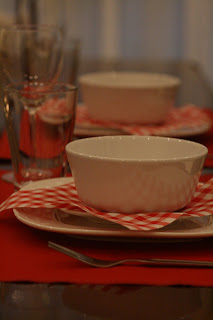 For some reason gingham, this checkered pattern, reminds me of summer so much! The theme for this table was summer picnic. Red and gingham.. plain steel cutlery, simple glassware. 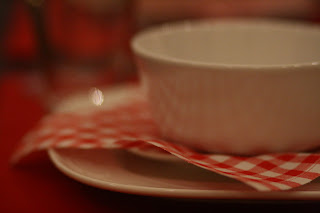 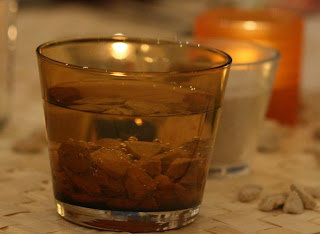 One of my table themes was beachy. The weaved straw layer at the bottom is a placemat! I combined lots and lots of them to form the "tablecloth" or base, if you will. I then took starched white napkins and ruffled them around the center for a "windswept" look.. and crisp white things are very beachy, don't you think? This was one of my little "accents" on the table. An IKEA candle holder filled with decorative pebbles and topped with water! Some people said it looks misleading in that people might take it for something to drink out of! Anyways I had a couple of these pebbled-and-watered glasses scattered around the table. With this beachy thing I could scatter just about anything.. Pebbles, rocks, turqouise beads, napkins, candles, water!! All beachy, empty glass bottles (nope, no message in it, sorry to disappoint you! but now I realized that would have been an interesting twist... maybe I could have placed the menu inside the glass bottle)! However, there weren't any shells here... I don't believe in buying shells when the sea is across the street! I can go scavenge for them!! Except that I don't have a shell collection and this table idea was very last minute so I didn't have a chance to go to the beach to get them! However, most shells are broken on our beaches... Anyways, knowing me I might just impulsively buy some... to keep it for when it's " needed ".. the excuses I give myself when I shop.. *sigh* :) 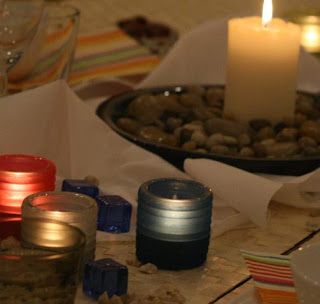 Colourful candles and fun paper napkins finished this look! You can see the centerpiece with the candle and pebbles around it! I poured some water over the pebbles in the centerpiece but I'm not quite sure whether they're clearly visible in this photograph!
Blogged by spontaneous-euphoria at 03:34