These pictures are from a dinner party that I hosted two weeks ago for some very good family friends who had come over to Dubai. Yes, the theme yet again is very feminine, but only because I was asked to! I had initially chosen a scarlet, ivory, and gold theme but switched after I was asked to! Feminine themes seem to be my speciality... 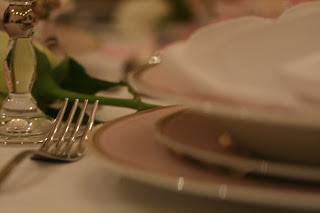 This is a close up shot of the crockery/cutlery/glassware. Since the table was predominantly pastel shades of pink, I placed white roses at each individual setting to break up the color. White roses are my favourite. I can use them everywhere. 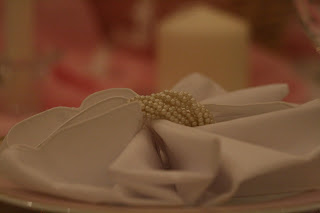 Close up of the napkin fold. This was placed on top of the soup bowl! I'm always at a loss where to place the napkin. Big dilemma, I know. These gorgeous pearly napkin rings are from John Lewis. *advertises* 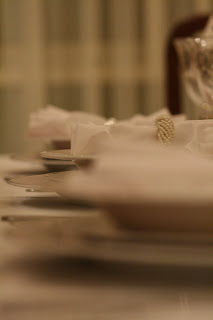 Yes, I like having the foreground in my photographs blurred. 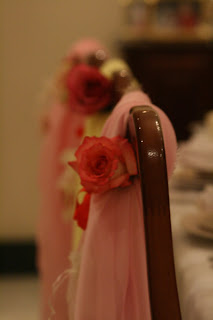 Similar trick done with the chairs as I did for the tea party! These sashes have little cream- coloured pouches with potpourri in them strung to the knot. 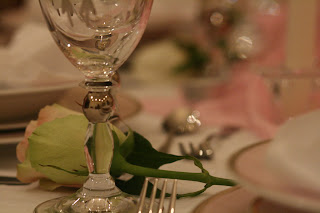 Another closeup of the rose and glassware. 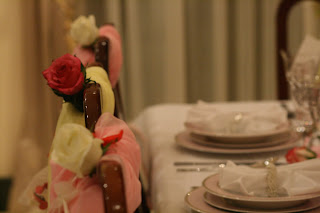 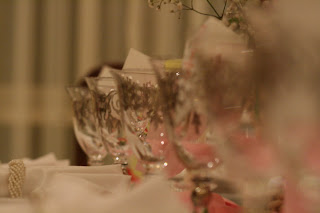 The glasses. Those papers in them are the placecards! 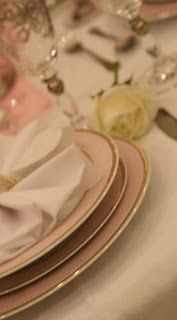 What an individual setting looked like.
I would love to post pictures of the centerpiece which was a wickerbasket filled with flowers in a contrasting HALF and HALF theme.. half of the basket had an abundance of pink, white, and yellow roses, chrysanthemums, and carnations and the other half just had leaves and some baby's breath (breadth? sp?) There were also cream colored candles scattered around. The pictures of the centerpiece TURNED OUT CRAP. So I won't upload them :) Enjoy.
Blogged by spontaneous-euphoria at 02:33